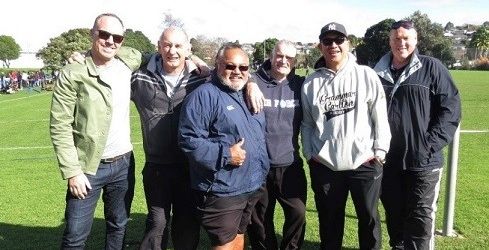 Rugby at One Tree Hill College is considered to be on the rise with the team winning 1A status last season and this season riding high in the 1B grade. This success is being recognised both locally and nationally. During one of the team’s most recent games, OTHC had the pleasure of welcoming back six of the school’s ex-players at the match against Onehunga High School. Players Peter Wheeler, Rosso Fernandez, Glyn Davies, Warren Makaua and Eddie Quensell had previously represented the college from various times during the 1950’s and 1970’s when the college was a force to be reckoned with. Mark Todd, (who competed in the sport during its reintroduction to the college in the 2000s) was also there to see the team that his firm Ockham Residential is the major sponsor of. The former players all enjoyed reuniting with each other and spent their time reminiscing about past memories, and sharing their own experiences whilst embracing the stellar 26-0 win earned by the current team.

Former player Rosso Fernandez who is a founding member of the ex-players association PHS Rugby Legacy reflected. “It was good being back, meeting all my old mates and reminiscing of those old days. We were very tight both on and off the field and played for our college with great pride. I was impressed with our present team and are glad that we past players are now able to support them.” 1st XV Rugby Team Co-Manager Mr Brian Langdon commented on the visit. “What an honour it was having these guys back, they were legends in their time and are still people for the current crop to aspire to.” Their and others revisiting, will ensure the continuation of the legacy and standard set by these past players will be continued and amplified. Overall, a day of joy and celebration capped off by a brilliant win.