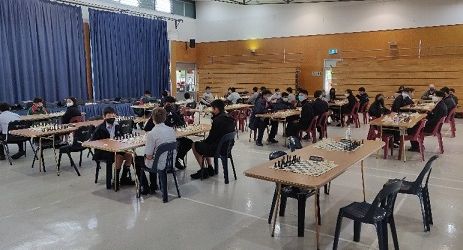 The One Tree Hill College Chess Club competes in the South-East Schools Zone against such schools as Sancta Maria and Mission Heights Colleges. Recently they participated in a tournament to find two teams to qualify for the Auckland Regionals. The OTHC team were very successful with Jonathon Hookings winning the individual title and along with the other members Neil Tapallas, Yaswanth Sirivuri, Aanav Prasad winning the teams’ event.

The next hurdle is the Auckland Regionals where, depending on the results the OTHC team could qualify for the New Zealand Championships. This success follows last year where the team got into the New Zealand Championships finishing a very creditable fifith. When asked about the great results, Team Captain Jonathon Hookings said, “Indeed I did come first but I think that we need to congratulate the team as a whole on an all-round performance. We all contributed to us winning the tournament and I am thankful for the team.

Two team members, Neil Tapallas and Aanav Prasad had an outstanding day improving their rating by more than 100 points.” Jonathon was also quick to thank Chess Coach Wayne McDougall who has assisted the Chess Club massively and teacher Mr Ang who supervises the club on Friday after school.