Excellence is a deeply rooted value within One Tree Hill College. It is held close to the heart of every pupil and bolstered by our school motto, Strive for Higher Things. It is appreciated so much by our school that it is one of our five most important and cherished values. However from time to time there are students who go way above the limits. For instance 2015 Double Dux winner Ariel who has become a symbol embodying this great value of ours to the highest standard.

Ariel is a seemingly ordinary person with a passion for learning. From his first day at One Tree Hill College to his last, everything done by this student has been extraordinary. For a start, before entering Year 9, Ariel introduced himself with a three and a half page long essay about what he hoped to achieve at this school. Although these were just early days this has proven to be a sign of a brilliant thinker on the verge of success. A continuation of his earlier impressive accomplishments at intermediate where he even made newspaper headlines. For Ariel a new chapter of this schooling would simply be another feather in his cap.

Constantly applying himself, Ariel won nearly every subject award since year nine. Not only a completely dedicated academic with a love for learning, Ariel was also a self taught musician. One of our principal’s anecdotes at our prizegiving including Ariel featured a story about how Mr Scott discovered Ariel playing the violin in the courtyard. From this Ariel went from playing in the foyer to composing a piece for the New Zealand Concerto Orchestra.

“Ariel is not just a gifted academic but he’s a well-rounded young man who threw himself into the college.” - Mr Coughlan

“[He was] always willing to help to the extent he had to be pulled back and told to stop.” - Mr Singh

Ariel’s achievements accumulated yearly as he took multiple scholarship subjects getting near perfect grades in all of them, no doubt an incredible feat for most students. However he still managed to look out for his fellow students as well, often spending time tutoring other students in Maths and the Sciences. On top of this he was a dedicated peer supporter and a popular member of the school’s prefect team.

One popular mention about Ariel was his successes in his scholarships, achieving six of the toughest exams for college students in New Zealand.  He achieved scholarships in Calculus, Statistics, Physics, Biology, English and Music, all with a total value of $2000 yearly for three years as well as an Otago University Academic Excellence scholarship valued at $45,000. When asked about how he managed with his scholarships Ariel has mentioned that it has to be done for the love of learning, with the prize money being ‘not worth it’ compared to the hours of study required to achieve it.

At the end of senior prizegiving assembly Ariel won a plethora of awards including two of the school’s most prestigious awards, the Dux Artium and Dux Litterarum, winning the former for contributions to the arts and culture, and the latter for his incredible academic achievements. On this honorable moment, he received a standing ovation for his incredible achievements. It was also revealed that the three and a half page essay he did before coming to school in year 9 was achieved, and more, with each and every I dotted and T crossed.

An inspiring leader who had the incredible ability to raise others to his level, he scored astounding achievements that will be in the records of One Tree Hill College for many years to come. It may be a long time before we see another Ariel enter our gates. 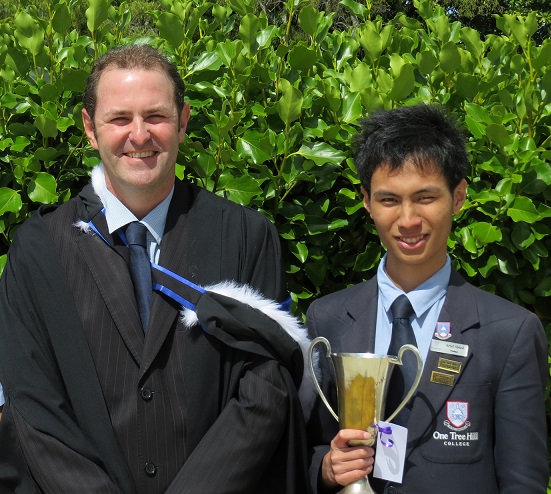