One Tree Hill College, formerly Penrose High School, opened its doors on 1 February 1955. It has played an important part in secondary education in the Auckland community ever since. Many of its past pupils are leaders in business, the performing arts, sporting, political and community organisations in New Zealand and overseas. The college adopted its present name on 21 July 2008. 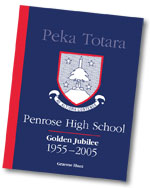 The college is proud of its rich history. A history was produced by past pupil Graeme Hunt for the golden jubilee in 2005. An addendum was also published that year. Both were updated in 2006 and are available for download as a PDF document.

The crest of One Tree Hill College, adopted before the college opened in 1955, symbolisies the strong association between One Tree Hill/Maungakiekie and the local community. It contains a depiction of the obelisk dedicated to "the Maori race" below which is the grave of the father of modern Auckland, Sir John Logan Campbell (1817—1912). On the crest (opposite) beside the obelisk is depicted the Southern Cross.

The tree depicted is not the pine removed in recent times but a symbolic young totara "groping courageously towards the skies", according to the foundation principal, Ron Stacey. It is symbolic of a large totara, Te Totara-i-ahua (Ceremonial Totara), that stood on the summit for some 200 years until 1852. The college yearbook was for many years called Peka Totara, meaning a sprig or branch of Te Totara-i-ahua.

Mr Stacey wrote in 1955: "We look upwards towards the summit of Maungakiekie where all that is finest in both Maori and Pakeha is commemorated for ever in stone and bronze." Mr Stacey saw the crest and its Latin motto, "Ad Altiora Contende" ("Strive For Higher Things"), as a merging of the old world of Europe with the new world of the Pacific.

"Ad Altiora Contende" frequently carries the Maori translation, "Whaia e Koe te iti Kahurangi", to symbolise the shared history of One Tree Hill/Maungakiekie and the partnership of Maori and Pakeha under the Treaty of Waitangi. A red band was added to the crest in 1999 but the crest has otherwise remained unchanged in the college's history. It was retained when the former Penrose High School introduced its new name, One Tree Hill College, in 2008.

Maungakiekie, meaning "hill of the kiekie [plant]", is a fine example of a pre-European fighting pa. It was first fortified in the 17th century and was home to the Waiohua people under rangatira Kiwi Tamaki until it fell to Ngati Whatua in about 1745.

The One Tree Hill name was first used in 1840. The hill was bought as part of a block of land from Ngati Whatua by an Irish merchant, Thomas Henry, in 1844. It was sold to Logan Campbell's firm, Brown & Campbell, in 1853 under the name of "Mt Prospect" and farmed thereafter. Much of this One Tree Hill estate, renamed Cornwall Park in honour of the Duke and Duchess of Cornwall and of York, was gifted by Campbell to the people of New Zealand in 1901.