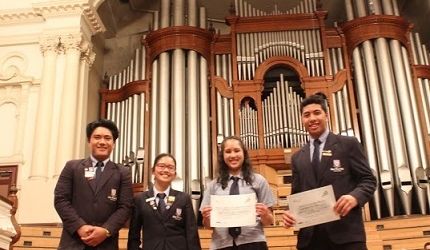 The Big Sing is a national secondary school choral festival that showcase some of the best choral singing the country has to offer. This year, 76 choirs performed in the Auckland Regionals throughout the four-day long sessions to student peers and the public, with a vibrant gala concert at the evening of each day. The Peka Totara Girls choir and Boys Chorale performed on the third day of the festival, singing three songs each. For some students, it was a nerve racking situation but they found that “it was enjoyable in the end”, and it turned out to be a rewarding experience - in fact, most are already looking forward to next year’s Big Sing. Awards were given in the end of the Thursday gala night, and both choirs won certificates: the Boys Chorale was the runner up for Best festival recital programme by a male choir, which was accepted by Head Choristers Inoke Fono and Salesi Akau’ola. Peka Totara won the Ministry of Youth Spirit of the Festival Certificate, awarded to the choir that displays leadership, commitment, high choral standards and innovation, which was accepted by Head Choristers Rocielli Fernando and Jez Reguerra. Choir co-ordinators Miss Blakeborough and Mr Gray reflect on the festival: “We couldn’t be prouder of how both of our choirs represented the school, and themselves; both on and off the stage. Many people from other schools commented on the high standard of performance that both the Chorale and Peka Totara showed on the day of the performance, and this is testament to the choir members level of maturity, musicality, and commitment to both their art, and each other. The respect for the choirs that performed was truly commendable and we were proud to represent One Tree Hill College.” Many thanks to choir directors Diana Rhodes and Terence Maskell, who have given up so much of their time to bring out the best in the choirs and perform at high choral standards, and Raewyn Seto and John Scott for the continued support and flawless accompaniment.