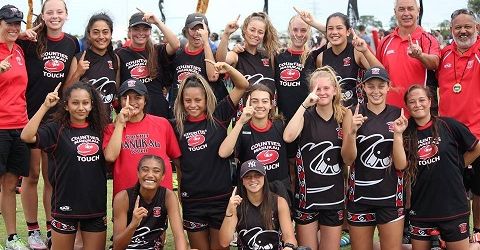 Both girls were solid performers throughout the 3 day tournament - defending strong in crucial situations, making good yards on attack and scoring tries to keep the score boards ticking over. Zayde played all 9 games and Jusdeen scored a great try in the Grand Final

The team played seven preliminary games, winning 6 and getting a draw on the last game, before defeating Auckland in the semi-finals and taking out the Grand Final against Otago 8-0.

We also had Leonie Renata Green and Shante Gribble playing for the Counties-Manukau 16s Development Squad and both girls performed well for their team.

The video to all finals can be seen on this link:

A huge congratulations to our four student athletes who were selected and played with great focus and determination. They have represented their Counties Manukau teams and the school so well.