This week the school is celebrating Korean Language Week. The purpose of Hangeul week is to celebrate the formation of the Korean alphabet, and culture. This is a week of pride and historical reflection for many South Koreans. The decision to implement the hangeul has had many effects on the state of South Korea and its people. For this reason, the alphabet and the minds behind its creation are honored on this holiday. The holiday is also celebrated in North Korea on 15 January each year, but North Koreans refer to it is as Jo-Sungul Day.

To mark this event, we had a contemporary fan dance performance by the Korean group at Junior Assembly today. This was the First Korean group for OTHC. Everyone worked very hard for the choreography. The first dance piece is a classical Korean fan dance inspired by ‘Salpuli’. Performers use their arms to form patterns representing waves and flowers. Our theme for this year was “Journey”. The dance showcased one’s journey to explore and finally through the patterns of waves and floral to express the feelings of joy and happiness. The rest of the pieces were Modern Kpop dance. We have selected the most trendy dance pieces for 2017.

A huge thank you to Ms Lee for organising this week. 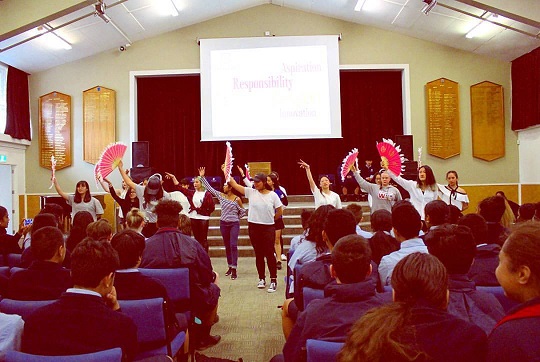