An inspiring selection of Media Studies short films and music videos were screened to a captivated audience at lunchtime on Thursday 31st August in the auditorium.  Y11’s Quaid Fletcher-Pirihi, Maggie Cunliffe and Cassidy Dennis created a music video to the song of ‘Youth’ by Troye Sivan utilising unique masks and time lapses.  The Y12 class made documentaries about a wide range of topics including car culture, resilience in sport, competing for the Junior White Sox, and the school ball.  Lucienne Velghe receives a special mention as her film ‘In the Face of Adversity’ was a crowd favourite telling the story of three senior netball players for OTHC Premiere team.  Another crowd favourite was ‘Behind the Curtain: Road to The Big Sing’ made by Juliette Leatua, Sou Opapo and Praise Misipeka-Kingi detailing the journey of the boy’s chorale group this year.  Kyra Sanidad and Edwina Faiva also documented the whole Y12 filmmaking process in their ‘Behind the Scenes’ film about the making of the Y12 documentaries using a ‘fly on the wall’ style.  Y13 student Rocielli Fernando scripted and wrote the screenplay for ‘Reed’, an original narrative short film about a budding saxophone player, this also received much laughter and response from the audience who appreciated her choice of actors and subtlety in camera work for comedic effect.  Overall the film festival was a much enjoyed celebration of hard work and creativity that the students can be proud of.

A huge thank you to Ms Mossop for organising and putting in so much work for her students and subject. 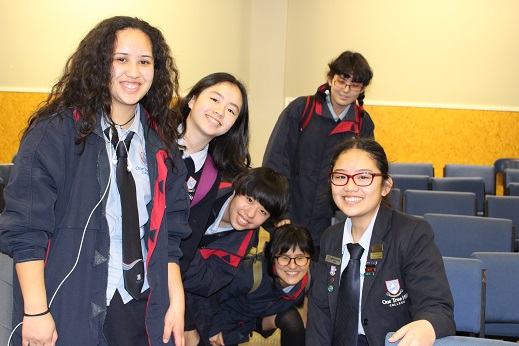