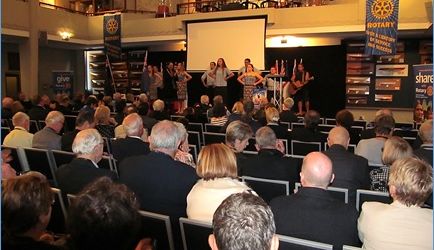 The OTHC Kapa Haka group were asked to perform at the opening of the annual Northern Region Rotary Clubs of New Zealand conference held at the New Zealand Yacht Squadron’s headquarters in Auckland. At the opening the group performed for the many delegates who were both enthralled, by both the enthusiasm that the group generated, and, by the precise way that their actions were carried out.

“The singing was superb,” said one delegate, “and it was outstanding that such a small group could generate so much volume with their enthusiasm.”

Newmarket Rotarian John Meadowcroft who organised the event was impressed with the performance and thanked the group most sincerely for what they had done. The college thanks the students, leaders and HOD Maori Whaea Meriana for giving up their time to organise and perform at the opening of this conference.